How Is Testosterone Produced? Where Does It Come From? 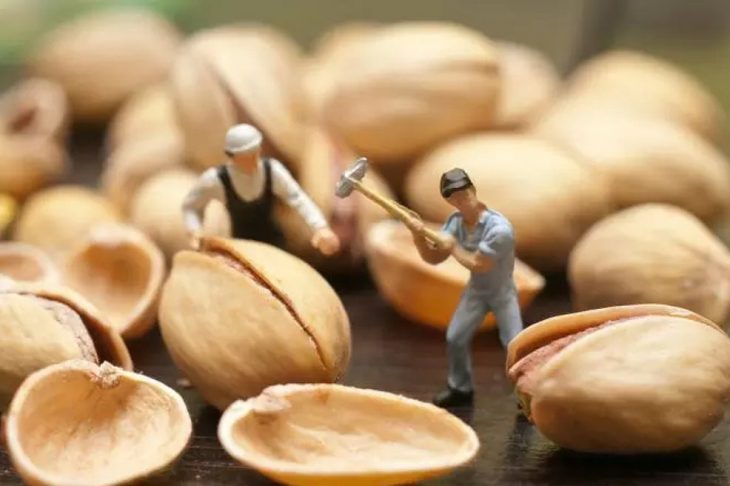 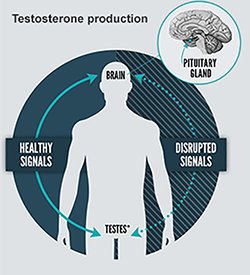 The production of testosterone is a complicated process involving your brain, hormones, glands and testicles.

There are other glands that come into the process, but for the sake of keeping things simple, the bulk of your testosterone is created predominantly in your testicles(gonads) – the same place your sperm is created.

For those looking for a more, in-depth overview of the testosterone production process, see the explanation below. The explanation was taken from Jay Campbell’s book, The Definitive TRT MANual ,which I highly recommend. 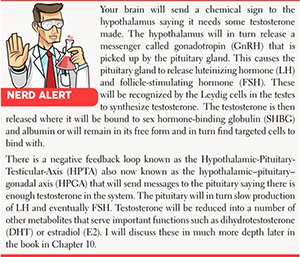 Your brain will send a chemical sign to the hypothalamus saying it needs some testosterone made.

The hypothalamus will in turn release a messenger called gonadotropin (GnRH) that is picked up by the pituitary gland. This causes the pituitary gland to release luteinizing hormone (LH) and follicle-stimulating hormone (FSH). These will be recognized by the Leydig cells in the testes to synthesize testosterone.

The testosterone is then released where it will be bound to sex hormone-binding globulin (SHBG) and albumin or will remain in its free form and in turn fnd targeted cells to bind with. There is a negative feedback loop known as the Hypothalamic-PituitaryTesticular-Axis (HPTA) also now known as the hypothalamic–pituitary– gonadal axis (HPGA) that will send messages to the pituitary saying there is enough testosterone in the system.

The pituitary will in turn slow production of LH and eventually FSH. Testosterone will be reduced into a number of other metabolites that serve important functions such as dihydrotestosterone (DHT) or estradiol (E2).

Welcome To The TRT Hub

You have Successfully Subscribed!

I help men take control of their testosterone, health and lives. Testosterone Replacement Therapy turned my life around and my goal is to help as many men with low testosterone do the same! Thanks to TRT, I traded anxiety, depression and weakness for courage, motivation, strength, love and masculinity. I'd love to help you do the same.

More about my story...

Who I Use For My TRT

If, like me, you struggle to find TRT in the UK and Europe, I’m happy to recommend Balance My Hormones. They are a private service that help men via a convenient online service. I have been with them since 2015 and have received great treatment.

I have not been paid to promote them and do so simply as a thanks for their help over the years. In order to remain trusted by the community, I do not do any paid promotions for anyone.